Investment News and Notes for Q2

Towards the end of 2019, TCS brought an exciting offer to its client base: Waterside Villas, a townhouse development near the lake facing the yacht club in Whitby. This project was a fast seller among TCS clients and for good reason. Today, as we are closer to seeing these units close at end of 2021 and in early 2022, the valuation on these units is between $1 million and $1.1 million.

You may recall that participants in this deal purchased a unit for just over $800,000 with an average deposit of 7.5% or $60,000. Therefore, the expected ROI (cash-on-cash) at the time of closing will be between 333 and 500%. Not bad for two years! As always, we are delighted on behalf of all our clients that bought into the Waterside Villas offer. We are also proud that TCS deal structures continue to outperform other investment choices in today’s market.

For our Waterside Villas clients that purchased four units versus the standard two-unit minimum, congratulations on a seven-figure gain! We are proud to have brought this opportunity to your attention. Let the good times roll forward as we collaborate on more opportunities together knowing that the TCS founders, Simon and John, are side-by-side investors in the deals we bring forth to all our clients.


Analyzing supply and demand in the Toronto market

"Toronto housing crisis.” It’s a statement we see and hear about often as being an absolute, rather than a forecast or estimate that appears to be correct. But where does this thinking come from and how did it get here? What is the impact on investors?  Is it really a crisis or simply an affordability crisis? There is lots of research around this topic you can read up on, so instead, let’s discuss its impact on real estate investments.

Put simply, Toronto is in demand. The city’s high livability rating, increased immigration and an ever-adapting economy – hello, tech hub! -- all lead to new housing supply quickly being gobbled up by the market. So, is lack of supply the reason for Toronto’s current situation? Sort of.

Demand plays a role here, too, as the two economic forces collide as we make our way out of a global pandemic. For example, high housing supply and relatively low demand keeps costs down, while high demand and low supply push it up. Toronto falls into the latter category, both pre- and post-COVID-19.

From an investor’s perspective, all the new construction, media frenzy, development launches and cranes in the sky mean prices for buying or renting a home have increased.

Several theories have been put forth to explain this: foreign investors, an outdated planning policy, interest rates, and an inflated bubble. Yet while they each may be relevant, could the answer simply be that this is an expected reflection of the economic climate in metropolitan areas, especially a dominant and leading city like Toronto?

If market conditions – we love any reference to the Invisible Hand! – simply run their course, why is Toronto not catching up to itself? New supply should respond to demand, and the growth curve moves along over time.

For investors and because of investors, the market interpretation of Toronto-based buyers’ income is somewhat skewed. Also, the scarcity of land couple with a stringent regulatory process further pushes the lack of supply issue. Let’s talk about bureaucracy: In an area where land use restrictions, planning rules and general fiscal policy limits the amount of new construction developments and units hitting the market, those forces all conspire to push up the prices of units that do make the market. Most discussions centre on not loosening the restrictions but rather getting the project approval process accomplished more efficiently.

Toronto and the G.T.A. are bound by geographic boundaries: Not mountains or oceans, but a lake and a greenbelt. This causes land constraints, and developers in the region argue that it is too difficult to deliver enough housing.

With regulatory controls slowing the market for new homes, de-regulation should allow the market to control the outcome. However, everyone would agree that some degree of regulation is necessary, because you must regulate growth in most regions. Also, the market alone doesn’t typically consider or recognize long-term livability and other human factors.

From a condo perspective, there are issues with the zoning and growth strategies in place, but it’s important to know that ground-related homes in the suburbs are declining. Over the years, much has been written about how zoning continues to look at Toronto through a 1950’s lens, continuing to allow one- or two-storey buildings. However, the Tall Buildings Guideline and other newer programs have helped shine some much-needed light on zoning and other antiquated issues. Because most of Toronto’s zoning remain unchanged, developers must obtain amendments for almost all sites.

Let’s discuss the demand side of the equation: Whether the current 2021 market is overheated or not, the long-term growth curve of Toronto’s population and real estate market will make condos and other high-density homes the requirement.

Nobody believes the gains we’ve seen over 2020 and 2021 to date are sustainable. There are mitigating factors at work here. And nobody believes Toronto’s market won’t keep increasing. There is a stark difference to gaining this much and normal growth. TCS continues to discuss this point at length with the media, because it’s the fundamental factor in condo investment growth, both over the past 15 to 20 years and as we move into the future.

In short, when analyzing the market and reading numerous articles out there discussing what the market is doing and what it will do, consider this: The reason for a housing shortage and subsequent price increases is a function of both supply and demand. The percentage each force is responsible for is hard to quantify, but also not important. Supply and demand aren’t mutually exclusive; any statement about why supply is leading the charge on the shortage can be correct, just as statements about the demand side being the cause can be.

The big question? Will either argument lead to policy changes and further regulation, or will the invisible hand win out, with the market taking care of itself?  Furthermore, more regulations – or revised ones – will likely not end the shortage. Just look at the prices in other major cities across the globe and you will see high prices are the norm, not a temporary situation. 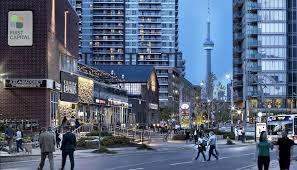 Why Toronto is above and beyond for real estate investment

Prior to the pandemic, a 20-year trend in many central urban neighbourhoods saw high-income and university-educated people moving in, reversing urban decline. The benefits when urban areas ‘turn over’ are great and wide-reaching.

The city’s booming economy and status as a leading global city for migration attract development from both public and private interests, thanks to increasing housing supply and the creation of enriched communities.

Toronto has many areas primed for gentrification, and those neighbourhood improvements should lead to a boost in property values. Properties that have been turned over in Toronto will benefit from this growth in appreciation. At TCS, this is one of our core principles:  We have put many gentrification areas on our clients’ radar, and early investment in these regions provided immense financial gains for many. Getting in early and investing in an up-and-coming area is a tried-and-true tactic.

For most of us, rental properties are a source of passive income and part of our ROI equation. Toronto’s consistent demand for housing impacts the rental market the same way. This dependable income exists alongside high property prices to create a huge demand for rental properties with limited vacancies.

The higher cost of living in the city thanks to a very strong economy means that tenants here tend to be higher-income earners than ones in other locales. This leads to an enviable situation where landlords are receiving strong rents and a more reliable income stream.

An economic situation that boasts both an increasing population and more people who rent puts investors in a very lucrative position as the high demand for rental properties continues.

Over the past 15 years, this has been the foundational principle of success for TCS and its clients.  Land is scarce in Toronto – as it is in many other urban areas – and that means it will increase in value over time.  There is very little room left in Toronto to build houses, which creates further scarcity. Coupled with a growing population, we will see more price growth.

Toronto leads the North American count for cranes in the sky, which is strengthened by a diverse and stable economy. Toronto is also becoming Canada’s tech hub, which will lead to more innovation and a flow of talented people moving into the city.